We’re neighbors. We’re friends. We run together, bike together, walk our kids to and from the bus together. We help each other with our respective children. We’re like sister-wives without the shared husband. We each have our own – thankfully, because we’re also competitive and competitive wife-ing could get ugly.

Not surprisingly, we also have done a lot of races together this summer. When we both decided to run the Truckee Half Marathon, we decided to run it in costume… together, as Thing 1 and Thing 2: because why not!?!?!?! So, the follow race report has, of course, been written by the two of us, yep you guessed it… together.

Thing 2: In true pre-race preparation, Thing 1 one and I readied our costumes on the eve of the race. Complete with blue fur headband, striped socks and red tutu, we excitedly laid out our costumes and began texting each other with ramblings of what tomorrow may hold. The plan was for Thing 1 to pick me up (just two doors down) at 6:55 am to be down to the race headquarters by 7:05. I know, big commute. I’m not sure how we managed to get any sleep that night, we were as giddy as two school girls the night before Prom.

The morning of the race, I hurried and dressed in my perfectly Seussical costume, ate my standard pre- race breakfast of oatmeal and bananas, drank ALL the coffee and kissed my family goodbye while snuggly in their beds. In true Thing 1 fashion, she pulled up to my house at 6:52 and raced up to my doorstep. I opened the door, we looked each other over and immediately began jumping up and down in excitement. Yep, two grown-ass women, dressed in stripes and tutus, pig tails and blue fur headbands, jumping up and down at 6:52 in the morning. Great way to start a Sunday!

When we arrived at the race start and check-in, we carried a buzz of infectious excitement and made our way to packet pickup. Everyone of course recognized Thing 1 because of her deep love for Big Blue races, but as a fairly new Big Blue racer, I was welcomed with laughs from fellow racers. We picked up our bibs, rushed back to the car to pin them to our tutus and get a break from the 28-degree weather. Before we knew it, it was time to race! It may have been the distraction of the costumes or that this was a training race for us, but we felt an odd absence of pre-race jitters and were just ready to run and have fun.

Thing 1: As we made our way to the start line, we got in to full character – giddy, silly, jokesters who weren’t taking ourselves or anything else, for that matter, seriously at all. It’s amazing how a simple costume can do that. Todd Jackson, the race director, gave the race briefing and then we were off. Thing 2 and I started toward the back of the pack because, clearly, we were in this thing to go all out and win it (#sarcasm). Running through historic old town Truckee, we waved to both of our respective workplaces which happen to be a few doors down from each other and that’s truly when the antics began. We started laughing – a lot. We waved, and yelled ‘hello’ and ‘good morning!’ to pretty much anyone or anything that passed us or that we passed. Yes, we may have been a wee bit obnoxious. So,

for those on course who were in the zone: we apologize or you’re welcome if we distracted you from your game day focus.

At about a 1/4 mile in, we veered away from Donner Pass road and began the climb up the dirt road to the community college and encountered our first race photographer. GAME ON! We started jumping, bouncing squeaking and squealing. Yes, like two school girls. Clearly, we entertained (and possibly annoyed) the other runners around us. As we descended the road down to the intersection of Deerfield Drive and Highway 89, we began planning what we would do for the next photographer. Would we jump? Curtsy? Fake a fall? Somersault? The possibilities were endless. At the stop light, we encountered Steve Buelna who was running his first marathon and struck up a short conversation while Steve tried to keep a straight face. As we all crossed 89, we wished him good luck and most importantly fun! Based on his race report it sounds like he had a wonderful time and a very successful first marathon. Congrats Steve!

Just as Todd had warned us in the race briefing, at about the two- mile mark, there was a section 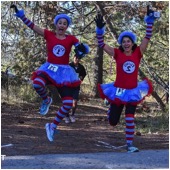 of single track and a plank bridge over a stream requiring all of us to run single file. No passing allowed. From there, we crossed the road heading into Coldstream Canyon and met up with the second and third race photographers!!!!! SHOW TIME! We ran, we jumped, we squeaked – and apparently, we made some funny faces too.

Thing 2: As we made our way into the Donner Lake Campground and
picnic area, Thing 1, in all her deep Truckee history knowledge,
began to play tour guide and point out certain rocks and landmarks
where the Donner Party camped out and snacked upon one another
during the infamous winter of 1846/47. After running through the
park and past what we call “the lagoon”, we began our climb up South Shore drive. During the Donner Lake Tri, I was convinced that this particular hill would be the cause of my untimely death – maybe Thing

1 needs a snack? Today was another story. We walked up the steepest section to help protect Thing 1’s pending calf recovery and enjoyed (really?) our mid-race nutrition (no cannibalism necessary). Once we hit the top of South Shore Drive, we resumed our comfortable run/chatting- pace and made our way around Donner Lake. This lake holds a special place in our hearts and we were surprised to see how low the water level was compared to a month prior. As we began running east along the north shore of Donner, we energetically waved at cars and passersby as we ran. I checked my watch and was surprised to see that we had hit mile 8. Only 5 more miles to go! I couldn’t believe how quickly this run

was moving, but then realized that Thing 1 was my audio book/music/entertainment and our consistent chattering caused me to forget we were even running.

When we reached the overpass to continue onto Donner Pass, we decided to kick it up a notch – in the entertainment department that is. The Truckee Police Department had detoured the traffic and gave us a giant smile and a happy wave as we passed by. Thank you, Truckee PD, for keeping all of us runners

safe! We waved at EVERY car and cheered when they gave us a wave, a smile or a honk in return. “Good morning!” “Hiiii!!” We had made it our objective to turn running into a performance art. Awesome.

Thing 1: Continuing east on Donner Pass Rd., there really wasn’t much in the way of scenery to distract us from entertaining ourselves or oncoming traffic. We got more animated, waving with hands in the air, smiling, jumping, whatever. Turning left at mile 11ish we encountered the dreaded Northwoods climb. Again, walking at a brisk pace to avoid reinjuring my calf, we continued our mobile comedy show. Traffic was moving slow enough that we could easily see people’s reactions. On the rare occasion that someone didn’t laugh or wave back, we just got more ridiculous until they couldn’t help but crack a smile. Would we have done this had we not been in costume, hell no! Costumes are the best!

We topped out at mile 12, turned right and proceeded onto the bike path heading back to the finish. What? No more audience in cars to perform for? Oh well – the giggles and silliness continued all the way. Who cares if no one else was entertained. We certainly were! This section of path is also quite pretty as well – bonus!

Our families were waiting for us about a tenth of a mile from the finish. The kids were cheering and screaming for us. Our husbands were mildly embarrassed but laughing and cheering as well. The kids joined us and we literally held hands and skipped across the finish line. It wasn’t either of our fastest half-marathon times – we finished in 2:25:37, but it was definitely the most fun either of us have ever had running a race!

Thanks Big Blue Adventure, Truckee PD and of course all of the volunteers for such a fun day!

Get the Goods Here